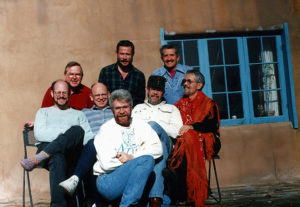 The picture I have chosen to remember for this Story Telling topic was one taken over Thanksgiving weekend in 1992. At this holiday we were at a property owned and operated as a B&B by a couple named Joan and Phil Blood. It was situated right on the banks of the Rio Grande in Northern New Mexico smack in the middle of what was called at the time the San Juan Pueblo. In 2005 however the Pueblo was re-named to reflect its pre-Spanish origins to the more appropriate Tewa name of Ohkay Owingeh.

A New York City artist and socialite named Dorothy Kent, who moved to New Mexico in the late 1920’s and lived there until her death in 1981, originally owned the compound where the B&B was situated. This property had 5 adobe cottages all with their own kitchens of various sizes with several of them rented out as places to stay when visiting the B&B. The Bloods mentioned above had moved out from back east I believe in May of 1975 to help their friend the elderly and frail Dorothy Kent maintain the property and slowly I believe coveted it to a B&B after her death in 1981.

So you may ask how did we stumble on this rustic nugget of a Bed and Breakfast and know that we, a group of Denver Queens, could encamp there for a long weekend over Thanksgiving and be very welcome with this being years before Purple Roofs was available on the Internet. Well the answer to that is my acquaintance with Harry Hay who is considered of course by many to be the founder of the modern gay movement certainly in this country. As good fortune would have it Harry Hay and his loving companion John Burnside had relocated from Los Angeles to Northern New Mexico in 1970. They eventually ended up living in one of the small cottages on this compound own by Dorothy Kent.

Some of you may be familiar with the 1977 documentary film by Peter Adair The Word is Out, which consists of 26 interviews with gay men and lesbians. This film I recall made its way to Denver late 1977 or early 1978. One of the vignettes is Harry and John being interviewed in New Mexico at the Dorothy Kent compound where they lived at the time, it was not yet a Bed and Breakfast. I was so impressed with their interview I went into the Gay Community Center over on Lafayette Street the next day babbling about it and was overheard by a woman named Catherine. She said she knew them well and would connect me with them if I would like. I jumped at the chance and my dance with Harry and John was begun.

Our first meeting was here in Denver I think in the fall of 1978 though it may have been that spring actually in a house I was sharing on Madison Street with several other folks. I am actually not sure of when I got to New Mexico to visit with them first but had a very memorable trip in 1983 with my partner David, Will Roscoe and others with Harry and John who showed us all around their beloved Northern New Mexico. We of course stayed in the compound with them in the same cottage featured as the background in this photo. I must clarify that by this time, in 1983, Harry and John had moved back to L.A.  The move back to L.A. on their part was prompted by the creation and birthing of the Radical Fairie movement in 1979 but that is a much longer story. So this 1983 excursion was a re-union of sorts for Harry and John and a chance for them to show some of their younger Fairie protégés their old haunts.

That Thanksgiving in 1992, being in the largest cottage, we had the space to enjoy each other’s company and prepare a wonderful feast with side trips to other magical Northern New Mexico sites including of course a spiritual sojourn to soak in the hot springs at nearby Ojo Caliente. All places Harry had introduced us to in 1983.

One of the attractions for Harry and John to Northern New Mexico back in 1970 was that it was as Harry described it a Spiritual Hot Place. Perhaps in many respects that is what we were looking for that Thanksgiving in 1992. This was right in the middle of that hellish nightmare called the AIDS epidemic. Four of us in the photo, myself included, were HIV positive with two folks already having pretty full-blown AIDS. We actually returned the following year, 1993, and successfully recreated another wonderful Thanksgiving. That was the last visit there though with Phil Schroeder dying in August of 1994 and David Woodyard in September 1995.

I do plan a New Mexico visit this June though with a dear friend from San Francisco. We plan on staying in Ojo Caliente, with the B&B being long gone. Who knows we might just go down that dusty dirt road to see what has become of Dorothy Kent’s magical old compound. Or maybe not, perhaps it is better to keep it as I remember it was in this old photo.