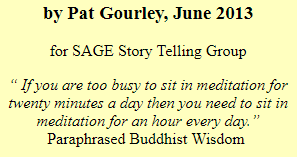 I am not sure that my spiritual coming out over the years has not really been more of a shedding of things rather than the cultivation of any particular tradition or significant growth and development on my part. If I try to put it on a life trajectory I guess maybe as my queer and political identities blossomed my religious/ spiritual side seems to have waned significantly over the decades, with the exception perhaps of a resurgence in the last 20 years of my often helter-skelter Buddhist practice and an ever evolving atheist ethos

I am aware that it is trendy these days in certain circles to say, “no I am not religious but I am spiritual”. The spiritual part of that is often for many defined in very vague terms involving some sort of unity with the whole Universe. One person though who has thought through this “one with the Universe” thing is my current favorite atheist Lawrence M. Krauss:

“Every atom in your body came from a star that exploded. And, the atoms in your left hand probably came from a different star than your right hand. It really is the most poetic thing I know about physics: You are all stardust. You couldn’t be here if stars hadn’t exploded, because the elements – the carbon, nitrogen, oxygen, iron, all the things that matter for evolution and for life – weren’t created at the beginning of time. They were created in the nuclear furnaces of stars, and the only way to get them into your body is if those stars were kind enough to explode. So, forget Jesus. The stars died so that you could be here today.”   Lawrence Krauss, A Universe from Nothing.

The root motivation for all religious or spiritual seeking seems to me to be very succinctly summed up in the following phrase, which I am quoting from Stephen Batchelor’s great work Buddhism Without Beliefs; “Since death alone is certain and the time of death uncertain, what should I do?”

The Catholic Church teaches that one reaches the age of reason at seven and then real sinning becomes possible, a rather rigid view of child development. My spiritual journey from this age of seven until about age seventeen was certainly laid out for me, no thought required, just a lot of something called Faith. The indoctrination in the Catholic religion though started in my Irish family much earlier than age seven of course. My adolescent discovery that sex with another man could be simply divine and that much of what the establishment had taught me about how the world worked in general needed to be seriously called into question. This was in large part thanks to a wonderful rogue Holy Cross nun and resulted in a rather rapid jettisoning of my early Catholic upbringing and beliefs.

Much of the 1970’s where spent in the proverbial lifestyle of sex, drugs and rock ‘n’ roll and then lots more sex with no particular spiritual bent. I did hook up with the local chapter of Dignity, a group of mostly Catholic gay men, who I think in hindsight were desperately trying to square being queer with being a good Catholic. Not sure that all worked out so well for most of them. I attended more to cruise than anything else really.

In the late 1970’s I entered my “pagan/earth mother” phase and this was fueled by contact with many feminists and the Radical Fairies many of whom also shared this spiritual worldview. I was influenced by the writings of a wonderful witch named Starhawk. One of my dearest possessions from those years is the first stain glass piece my loving companion David made for me, a beautiful and very colorful pentagram.

The eighties were probably my least ‘spiritual’ in any fashion with delusion setting in that Goddess worship may not have been all it was cracked up to be. The struggles with mortality were also coming home in a big way as many started dying from AIDS. Nothing like a lot of death around you to force the question “what should I do”? Chanting, however fervently, to the Goddess didn’t seem to help much.

In the early nineties and up to the present I guess my “spiritual trip” can best be defined as Buddhist. A ten-year stint with the Kwan Um School of Zen and work with great teachers cemented my practice or at least I learned how to better sit still and be quiet.

In pondering coming out spiritually I think it must be an ongoing process, as most coming out is, and I am drawn back to the Stephen Bachelor’s injunction I quoted earlier and that is “what should I do”. This question presented itself in rather stark fashion this past Friday on my walk back from the gym.

Around 1100 in the morning walking down Logan Street heading south toward 13th I was approaching a favorite panhandling corner. I noticed a body lying on the sidewalk, unusual placement for those with signs and in pursuit of the very hard work that is surviving as homeless in our big cities today. I could already see a couple folks stepping over the prone figure or walking around and no detectable movement. On approaching I saw it was a man and he could have been any street fellow, way over dressed for the weather but layers are important when you are on the street 24/7, and desperately in need of a shower. He was strategically sprawled in the shade of the only tree on that corner. I quickly started trying to process what was going on and whether or not I needed to try and intervene here.

I stepped around him as several others had already done and I kept walking.  I continued walking across the street and down the block looking back and thinking, “what should I have done”. That is a really totally bogus and useless question, and not what Batchelor asked, his question was “what should I do”. On my next look back I saw two guys with leaf blowers work their loud obnoxious machines right around him and this disturbingly seemed to elicit nothing from the prone body.

What I should do then became obvious and I walked back to where he was. I saw more clearly then that he had his arm curled under his head, a good sign, not a pose for someone in extremis. I then tapped the bottom of his foot with my shoe and said in a loud voice: ‘hey man are you alright?”  To my great relief he immediately responded partially sitting up and trying to focus on who was disturbing what was obviously a nap in the shade, a break from being on a very hot, exposed corner asking passing motorists for change. His crumpled and very poorly lettered sign stating ‘anything helps’ and invoking God to bless whomever was serving as a makeshift pillow on the concrete. Our society has substituted the time honored Buddhist begging bowl with a begging sign.

I then said that he should think about moving before someone stepped on him. This seemed to register a bit and then he responded that he would as soon as he finished his hamburger. I then noticed, what quite frankly looked like garbage, on a small cardboard container with some sort of scraps, salvaged from the garbage perhaps and showing the wear and tear of being in the 90 degree heat. This had been strategically placed on the sidewalk right under where his chin had been on the pavement. Right wing conservative ranting’s aside I was sure he was not finishing up a serving of crab legs purchase with food stamps. And a lecture on food poisoning would have been way to middle class and certainly of little benefit.

Satisfied we were not in any sorts of 911-territory I said again ‘don’t get stepped on’ and headed home, once more convinced the question should always be ‘what should I do’.