My first adventure with the hallucinogen called LSD was back in the fall of 1968. I had recently moved out of University housing and was living with a bunch of other hippies. I remember little of that trip except that I found watching golf on a black and white TV to be fascinating enough to occupy me for several hours. It was the funniest thing I could ever remember having seen in my life. Grown men hitting a little white ball and trying to get it into a hole nearly as small –over and over again.

LSD and mushrooms became a significant form of enjoyment and diversion for me throughout the 1970’s culminating in a bad experience one evening in October 1979 at the then Empire Bathes. I can’t say that I ever saw Jesus or reached any sort of enlightenment as a result of the use of these substances but I did sure have a lot of fun. The favorite activity for several friends and myself was to do walks in the nearby nature preserve where we would spend many hours taking in the amazing intricacies of the tress, flowers and plants of various types. We could be totally intrigued for many minutes at a time with the comings and goings of little ants. We were sure we were all actually truly one with nature. In hindsight we were probably just wandering aimlessly.

My last use of hallucinogens was as mentioned above one fall evening in 1979. This involved mushrooms which I had an ample supply of thanks to a E.R. physician friend and occasional sex partner who was growing them in an elaborate small closet set-up in his apartment. That night culminated in the intense smell of curry, making Indian food off limits for years, an ambulance ride, offers from EMT’s to take me right home if I would sell them some “shrooms” and finally ending up at the home of a dear friend who made me sit quietly and peel an orange making everything all better. Oh and there was the nearly incapacity anxiety and fear that I was dying, something I was unable to convince anyone else of with whom I came in contact that evening.

Why I had not had a bad trip in the proceeding decade of frequent use has often puzzled me and why did it occur in my favorite bathhouse, oh the cruelty of it all. In my more philosophical moments I have thought maybe I was actually seeing the approaching demons that would destroy much of my world in the form of AIDS. Were the cement gargoyles around the outdoor pool at the Empire urging me to flee before it was too late? They were certainly freaky and animated looking that night and scared the bejesus out of me.

I must say my life has not been any less for my lack of street drugs for the past thirty plus years and alcohol, a good Vodka in particular, has not even been a part of my life for the past five years. I have for example been able to immensely enjoy the music, live and recorded, of my favorite band the Grateful Dead with the aide of no mind-altering substances.

The current incarnation of the Grateful Dead trip is the band Furthur named after the infamous Ken Kesey and the Merry Pranksters bus also called Furthur and that is spelled F-U-R-T-H-U-R.  The original bus was a 1939 International Harvester school bus that Kesey purchased in 1964 painted in psychedelic colors with a destination placard on the front with the word Furthur. The Smithsonian has asked for the bus but Kesey has refused and it’s currently on his farm in Oregon. Tom Wolfe also referenced the bus and called it Furthur in his book The Electric Kool-Aid Acid Test. 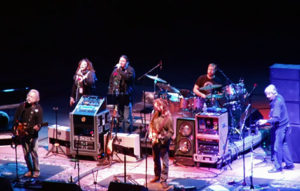 For those perhaps not familiar with the term ‘acid tests” it refers to a series of parties Kesey sponsored for the express purpose exploring the use of acid primarily in the Bay Area in 1965 and 1966. There were often bands on hand for these acid tests and one band often featured was the Grateful Dead. This probably accounts for the long association of the band with this drug. Some historians believe these parties marked the transition from beat culture to the hippie movement.

An esoteric note that I am sure no cares much about is that Phil Lesh, the original bass player for the Grateful Dead, in particular through his side bands called Phil and Friends and Furthur has resurrected many of the early Dead tunes from this psychedelic period though now played in much more melodic fashion by musicians much more adept at their instruments in my opinion. These tunes were largely dropped or very rarely played throughout the remainder of the Grateful Dead’s career in the 70’s-80’s and 90’s.

So Flying High was much on my mind the past few weeks with Furthur in town for four nights up at Red Rocks. I caught the first and fourth shows being a bit to long in the tooth to get to all four. The band plays three to three and half hours of music per show split into two sets. The first set of this stand seemed to be a loving nod to the recent suffering from the floods. Let me share the lyrics from the first song of the first set a tune called Crazy Fingers lyrics by Robert Hunter music by Jerry Garcia:

Your rain falls like crazy fingers
Peals of fragile thunder keeping time
Recall the days that still are to come some sing blue.
Hang your heart on laughing willow stray
Down to the water, deep sea of love
Beneath the sweet calm face of the sea swift undertow.

Life may be sweeter for this, I don’t know,
See how it feels in the end.
May lady lullaby sing plainly for you soft, strong, sweet and true.
Cloud hands reaching from a rainbow tapping at the window,
touch your hair
So swift and bright strange figures of light float in air.

Who can stop what must arrive now?
something new is waiting to be born
Dark as the night you’re still by my side shine inside.
Gone are the days we stopped to decide where we should go,
we just ride.
Gone are the broken eyes we saw through in dreams gone,
both dream and lie.

Life may be sweeter for this, I don’t know,
Feels like it might be all right,
While lady lullaby sings plainly through you love still rings true.
Never could reach it, just slips away but I try.

From this the band jammed into another old tune called “ I Need a Miracle” and then into Here comes Sunshine with the iconic first line “In the wake of the flood…here comes sunshine”.

Needless to say I was totally swept away by this music I have come to love so much over the past nearly 40 years. There was not a single mind altering substance involved on my part, certainly not the case for many others in attendance though. Just an amazing harvest moon coming up over the back of the stage, the camaraderie of 10,000 like minded souls, all dancing that peculiar Grateful Dead twirl and my favorite music in the world played with great love and intention., Flying High indeed.