If I were to take the high road with this topic I suppose I would explore my options for a “good time” by discussing my friends and time spent with them sharing a movie or a meal I have prepared especially to accommodate their particular dietary idiosyncrasies. Or perhaps relate my anticipation for seeing a couple of Furthur shows next month at Red Rocks with 10,000 of my closet associates. Prowling a Farmer’s Market, taking in the latest vegetative creations at the Denver Botanic Gardens or curling up with my kitties, a good book and a pint of Ben and Jerry’s are also things that work for me when it comes to a good time.

I will dispense however with the “high road” for the remainder of this piece and look at the tried and true completion of the phrase which would be “for a good time and hopefully a happy ending” call 555-5555. In decades gone by this exhortation was often seen scrawled on public toilet stalls along with the requisite phone number. For the extremely bold the phrase might appear in a personal print ad, though the “good time” was often just implied as was the “happy ending”.

Throughout the 1970’s a “good time” for me involved heading out to the bathhouse. I do believe that as gay bathhouses evolved in that decade they were a truly unique space created by gay men. There certainly had for millennia been public bathes that often had a homosexual cruising element but the gay bathes as manifested in large American and European cities largely after Stonewall had no pretext or subterfuge about them. They were gay male space created for the express purpose of getting laid in a relatively safe place often catering to and facilitating a variety of gay male sexual fantasies.

The amenities were simple but plentiful including safe lockers, clean towels, private rooms, slings, suitable lengths of plastic douching hose with hookups right next to the toilets, orgy rooms, steam rooms, lots of hot water, reasonably priced poppers and buckets of free cheap lube, usually whipped up like cake batter in big batches by the employees. This lube was often a mix of baby oil and Crisco or some other vegetable shortening on sale that week at Safeway I expect. Johnson & Johnson was almost always the source of the baby oil. Condoms were certainly not readily available and if so their use was at best frowned on.

Though in hindsight the baths may have initially fueled the AIDS epidemic after that horse was out of the barn I always felt they were more a form of quarantine for the already infected than really significant vectors.  Certainly before AIDS the tubs were I think overall very conducive elements to the building of the potent queer liberation movement of the post Stonewall era. I mean what could go wrong in these ultimate palaces of testosterone fueled gay male bonding where fucking with as many or as few men in a single visit as you could accommodate was easily facilitated, the ultimate male fantasy.

Some unfortunate drawbacks did exist and in some forms persist today. Many bathes were mob owned and often enforced very racist and ageist door policies though in their heyday there was a variety of establishments that accommodated nearly everyone.

The tubs still exist today but after a severe curtailing in the 1980’s due to the AIDS epidemic they have never fully recovered to their 1970’s glory. Perhaps though even more significant than fear of disease in their decline has been the Internet. In case one forgets for a moment the importance of this when you type “Internet” and neglect to capitalize the “I’ it spells checks to remind you to do so.

For myself personally as having been a child of the tubs decades ago and fortunate enough to have had a couple of relatively good long term relationships, I now am occasionally at a loss really as to where to go for a sexual good time. I do though rely on my left hand (I am right handed but go figure), a tube of Vaseline and my computer. And FYI the word Vaseline also insists on being capitalized on my Apple product. 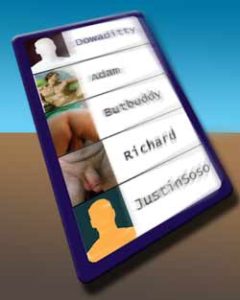 Gay men though being the masters of the “hook-up” that we are have evolved quite well with the times. One example of this would be Grindr – spelled G-r-i-n-d-r – which is a geosocial networking application available for download from the Apple App Store and Google Play. This can best be described as making use of GPS and your computer, tablet or iPhone to find other men near by specifically for sexual hook ups. This can happen in an instant of course and eliminates the tediously time consuming efforts involved in the past for meeting up with partners at bars, parks, parties etc. and very little social chit-chat is required.  Simply to initiate a “good time” text to xxxxxx.

The Grindr app provides an interface that displays photos of men arranged in order of proximity to your current location. Tapping on a photo of interest will provide you with a brief profile hopefully not a total pack of lies. Needless to say this award winning social networking tool has been a wild success all over the world. And thanks to Edward Snowden we now know that all of the personal information provided on this platform is and will be carefully stored for possible future retrieval at the large and ominous NSA facility nearing completion in neighboring Utah. The old vice squad of yesteryear must just be wetting their pants with jealously.

Again for me personally I must confess that Grindr is not an option I am willing to explore and not for any fear of the NSA though it is none of their fucking business and a violation of my 1st, 4th and 6th amendment rights but I digress. Rather it is difficult to teach an old queen new tricks or how to find new tricks. I am for the most part quite content with my computer and a couple dear old comfortable and reliable (and I use the phrase with the greatest of love and affection) fuck buddies. In a concession to the times though they are contacts on my iPhone and I call them with a simple touch most likely unable to actually dial their number from memory.