I realize that one of the great challenges of my life has been to appreciate that I am “here” and to not worry about being “there”. I have a nearly all-consuming preoccupation to be “there” and of course when I get “there” and that turns into “here” and then I am off and running in my head once again to get “there”.

In the early 1990’s when my partner David was feeling the ravages of HIV, I was the nursing manager of a local AIDS clinic and friends, acquaintances, strangers and folks I was working with were dying all around me. It was in those years 1990-1995 that I probably felt the strongest draw I ever have in my adult life to find some sort of spiritual solace, or maybe it was refuge I was after. My childhood Catholicism had long ago fallen by the wayside and a return to that worldview totally out of the question. I came to realize that most religions and my own prior belief in a “God” were responses to the fear of my own death and the stark, finite reality that death is. Belief in an after-life was out the window with Santa Claus and the Easter Bunny. It was very hard to grasp that this amazing ego, “me” will just come to an end at my death. Even today I find it at times unimaginable that this life is it and there will be no heavenly reward or more likely for me eternal damnation if I were to believe the bible to be anything more than bad mythology. 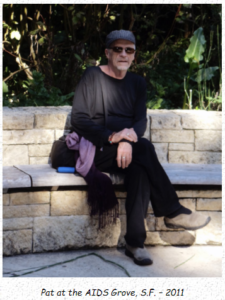 When I think about it religion and its belief in an after life is the ultimate “there” trap, truly a false illusion distracting from “here”. If it is really lousy “here” it will all eventually be better “there”, nothing but wishful thinking and snake oil at its worst. I suppose being involved personally and professionally in the AIDS nightmare up to my eyeballs was responsible for this longing on my part for a “there”. So I fell in with a group of local Buddhists. I was attracted first to the Korean sect of Zen called the Kwan Um School by a hospice nurse named Richard who worked with many of our patients in the AIDS Clinic. He was an active participant in the school and had close ties with one of its leading teachers a woman who was also a lesbian and hospice nurse herself, sort of the complete package I thought at the time.

Certain Buddhist sects are big believers in reincarnation, which I view as just another form of the “there” game though they would never admit this with all schools incessantly pointing to “being here now”. If I can’t escape the wheel of samsara in this life I will reincarnate and get another chance, or if I really fuck-up this go-around I may come back as a cockroach. My attraction to Zen practice was in part because they are not big believers in reincarnation and of course there is no talk of a ‘god” in Buddhism. The Buddha is viewed as an enlightened being, something we are also if we just wake up and see it.

At the time this Buddhism seemed the perfect salve for my HIV inflicted wounds and of course if I was honest it was my own HIV infection that was driving the quest. So for the next 12 years or so I was quite active with the local chapter of the Kwan Um School developing my own private sitting practice and being involved with numerous group retreats most often led by our teacher who came out from Rhode Island for these events.

I was involved to the point of taking the initial vows called The Five Precepts:

These seemed to me way more realistic and appropriate suggestions for a moral life than the Ten Commandments ever were. Needless to say 12 years with the Sangha and lots of cushion time did not result in anywhere near full actualization of these vows.

One of the rather neat components of the initiation ceremony when I took my vows was the lighting of a small wax wick that was placed on the underside of your left forearm and allowed to burn down until you felt it start to singe your flesh. Talk about a strong method for getting you to focus on the moment. You don’t think about anything else but the pain of the here and now and putting that sucker out.

I no longer practice with the Kwan Um School but do still try to maintain some semblance of a solo practice. The whole goal of meditation, that I do really believe has tremendous benefit and lessons, is to be “here” now and not somewhere over “there”. To be banking on or even worse perhaps preoccupied with an afterlife really has the potential to rob us of appreciating the absolutely amazing reality that we are “here”. Our human birth is such an unbelievably unlikely reality as to be truly mindboggling.

The great teacher Ram Das summed it all up in three simple words: Be Here Now!