I have for years had a penchant for photographs of my friends and myself. Since retiring from full time nursing in March of 2010 I have had time to go through my old writings and look through many old photographs. An abject lesson in the frailty and impermanence of this life on earth is to compare how one looks today with photographs from several decades ago. For many folks this can be a rather jarring experience. It certainly has been for me. 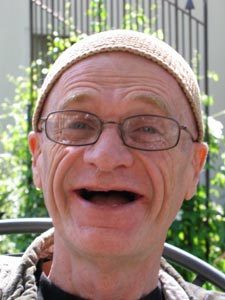 This perhaps reflects the cultural indoctrination that says true beauty is found only in youth. The fact that I think I looked much better, even healthier, in photos from a few decades back than I do today is really just a subjective value judgment on my part I suppose.

Correct thinking or not I liked my face better when it was fuller and less gaunt. My ass seemed much more appealing to me in its bubble form of 1978 than in its current flat and saggy state along with my flat belly as opposed to my current rather large gut. I do at times long for the days when sexual arousal and performance pleasing to my partner and myself was almost automatic. Oh and of course I pine for the days when I had more teeth!

The myriad human cultural beliefs around an afterlife, and God in general, seem to be the result of a consciousness that has evolved to the point of being able to recognize among other things our own mortality and that fucking freaks us out! The inevitable reality of my own death has been on more than one occasion in my life the impetus for getting involved in some spiritual trip or another.

The thought that we will cease to be at our death can be a powerful motivator for cooking up something that might allow us to continue on. This over the ages has gotten tied to many different religions and their rules and regulations. If we follow the dogma we will be rewarded if not our fate is some form of hell.

For me personally this worldview was ingrained in the relentless indoctrination that was Catholic School in the 1950’s. We studied our one true religion in the earliest grades from a tome called the Baltimore Catechism. Since much of what was presented in the catechism could not be easily validated if scrutinized carefully the essential component of “faith” was introduced very early on. The interesting caveat, “trust us, this is the real truth” was always implied along with the frequent injunction to just accept things on faith if parts of the story did not seem to ring true.

The problem with this of course was that over time I came to realize how “wrong” the church, state, politicians, clergy, my teachers and even my dear parents were about certain things. This evolving skepticism soon began to engulf my “Catholic Faith”.

A superficial delineation of my various spiritual trips sort of goes like this: Catholicism<pagan/wiccan<Buddhism with significant periods of not doing much about spiritual growth and development at all. Often getting several toes wet but if I am honest I guess I really never jumped in head over heels with any spiritual trip. Bottom line is that to date I have been a pretty lazy seeker of spiritual truths.

I have had though the reality of my own mortality brought into sharp focus since the mid-1980’s through my own HIV infection. This was intensified in the early 1990’s by the nightmare that the AIDS epidemic was in those years for me both personally and professionally. Working in an AIDS clinic in those days, watching a dear loved one slowly die at home from complications of HIV, having many friends dying similar deaths and being infected myself sort of resulted in having my nosed rubbed into the reality of my own impermanence.

I must admit to a certain amount of hopelessness in those intense years. I did manage though to survive relatively intact and owe a great debt to the books and insights of the great, world-renowned philosopher Ken Wilber. If you are unfamiliar with Wilber’s work you could start by clicking on this link.   It was through a confluence of things that led me into my Buddhist practice. The writings of Ken Wilber, a hospice nurse friend and the nearly daily wondering if this was how it was all going to end, a gruesome death from HIV all helped to push me to the cushion.

The school of Buddhism I practiced with the most in the past was the Kwan Um School of Zen, a Korean sect, studying most intensely with a teacher named Bobbi Rhodes. A key element of this school’s teaching was the concept of “only don’t know”. I do think I came to realize the inherent validity of really “not knowing” answers to many of life’s most challenging questions and that it was OK to be with that realization in my daily life. This of course certainly extended to whether or not there could be any sort of “afterlife”. Only don’t know!

However after a good decade of hanging with folks in the Kwan Um organization my disillusionment with components of the practice and its various trappings started to arise. The end of our local sangha accelerated this disengagement and I drifted more into a mediocre solo practice and back towards the writings of a man named Stephan Batchelor when it comes to Buddhism. Two of Stephan’s books I found particularly helpful were Buddhism Without Beliefs and Confession of a Buddhist Atheist.   If I can be so bold as to try and describe Stephan’s teachings he delves back into the original scriptures (the Pali Canon) and tries to get at the root message the Buddha was teaching and then to decipher what his life really was all about. He does I think a good job of stripping bare the many and different cultural overlays that have evolved down through the centuries around the Buddha’s core teachings. I highly recommend his books and many taped talks for any serious student of Buddhism.

So where am I with this whole business of my own mortality and the most certain reality that this life is the whole show for me? I must admit I do occasionally long for the comfort my childhood Catholicism provided at least some of the time. With enough Faith and a few good works thrown in I could be assured of my reward of eternal life in heaven. But that just doesn’t do it for me anymore.

So one might ask why my agnostic/atheist view doesn’t send me into the depths of a nihilistic depression. Doesn’t seem to though and I think I have been aided in avoiding that fate though my Buddhist study and meditation. Buddha was not God, and whether a God exists or not is really a matter of “only don’t know”.

I have also found solace and support for my current beliefs in the writings of several prominent “new atheists”, Sam Harris and Richard Dawkins in particular. This link is to piece a fellow named Adam Lee who wrote on some of Dawkin’s work. The piece addresses the absolute wonder of the Universe. That I have had the immense good fortune to be born into the great mystery and ongoing adventure that is life on Earth seems to get me through the day just fine. I often find myself in a state of just plain awe!