A personal role model is someone whose behavior you admire to the point where you might actually try and emulate it and hopefully use it as impetus for creating change. Chelsea Manning is that queer person for me these days.

Let me briefly re-cap her history and I’ll finish with a bit of her current activities. She enlisted in the army in October of 2007 and eventually ended up in Iraq in 2009 as an Intelligence Analyst with access to classified documents. What transpired as a result of Manning having access to copious documentation of U.S. military and private contractor actions in both Iraq and Afghanistan is succinctly stated in this quote from a piece written by Nathan Fuller in March of 2013 for the Bradley Manning Support Group:

“What would you do if you had evidence of war crimes? What would you do if ‘following orders’ meant participating in grave abuses you opposed? Would you have the courage to risk everything  – even your life – to do the right thing? Most of us would keep our mouths shut. Not Pfc. Bradley Manning.”
Nathan Fuller 3/2013.

Manning released a very large trove of classified government documents to WikiLeaks certainly as a matter of conscience. Once exposed and arrested she endured months of torture in solitary confinement. Her subsequent trial resulted in a 35-year sentence based in part on several counts of violating the Espionage Act of 1917. This antiquated piece of legislation is by the way being put to unprecedented use by the Obama Administration to prosecute and persecute whistleblowers. 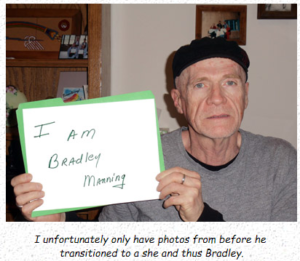 The prison sentence was handed down in August of 2013 to one named Bradley Manning and the following day she announced that from now on she wished to be referred to as Chelsea Manning and would be further pursuing her transition and hopefully receive appropriate hormone therapy. Last week on February 13th,  2015 her hormonal therapy was approved after suing the Federal Government for the right to receive this treatment.

A criterion I have for my role models is that they cannot be silenced even in the face of great obstacles. This applies to Chelsea in the most remarkable ways. In spite of years of humiliation, months of actual torture and a monkey trial for espionage she is still resiliently standing up for her core values and beliefs. Transitioning is always a great challenge but to persevere with it in a military prison after years of physical and psychological abuse and humiliation in attempts to break your spirit and crush your soul is simply a breathtaking act of courage. I know I will never have the fortitude to be anywhere near as brave.

In any piece I might write today that addresses the brave act of transitioning I cannot forego the opportunity to address the recent comments of Pope Francis on the matter. There are a whole string of his outrageous comments on gender transition I might quote here but I think this one is the most amazing: “Let’s think of the nuclear arms, of the possibility to annihilate in a few instants a very high number of human beings…lets also think of genetic manipulation of life, or of the gender theory, that does not recognize the order of creation.”  WTF! Sorry Pope Francis but your head is way up your ass on this one. Our trans brothers and sisters are not a threat to the survival of the human race but quite to the contrary a true expression of out evolutionary potential.

Let me close by updating you on Chelsea’s current job in prison. She is now writing for the Guardian. One article she authored appeared December 8th 2014 and was titled: “I am a transgender woman and the government is denying my civil rights”. I encourage you to click on the link and read the whole thing. I’ll close with just a few of her words from that article:

“A doctor, a judge or a piece of paper shouldn’t have the power to tell someone who he or she is. We should all have the absolute and inalienable right to defend ourselves, in our own terms and in our own languages, and be able to express our identity and perspectives without fear of consequences and retribution. We should all be able to live as human beings – and to be recognized as such by the societies we live in.
We shouldn’t have to keep defending our right to exist”.    Chelsea Manning

Chelsea Manning, my favorite Queer role model!
If you are interested in learning more about this great queer heroine check out the web site for her support group.