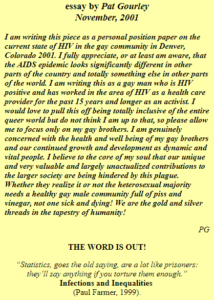 It is the fall of 2001 and we are reeling from the recent terrorist attacks on the World Trade Center. We also are twenty or so years into the AIDS epidemic in the United States. As it turns out it is now an epidemic ravaging many parts of the globe, Africa in particular but Southeast Asia and the Indian subcontinent are trying hard to catch up. In the USA the epidemic has undergone significant diversification in many parts of the country though it seems that here once again the emerging risk group is homosexual men this time with a slight racial twist. It is gay men of color who are being disproportionately affected, but queer nonetheless. The fact that it is gay men again emerging as perhaps the main risk group in this country for infection with this virus should not be lost on anyone, particularly those in the AIDS arena.

Probably the most striking example of priorities and the worth of certain groups in society today are reflected in all the intense hysteria recently around the bioterrorist anthrax scare. Total dead from anthrax to date = 3. Total dead in the world from AIDS yesterday = 8,000. The vast majority of these AIDS dead of course are in other worlds, particularly Africa.

Perhaps it is only appropriate that the USA as a society does not dwell too disproportionately on AIDS. I find myself reflecting on how once again in this country it seems to be gay men at the forefront of those getting infected. Many are incredulous about this after what has been lived and experienced in the gay community in the past twenty years but we must remember that it’s a whole new generation of gay men twenty years later. Lets face it: anything gets to be old hat eventually. Trust me – we will soon be bored with the fear of getting anthrax. Life just has a way of going on and being pre-occupied with this or that never seems to last.

The reality is that to get AIDS and be heterosexual in this country almost always necessitates IV drug use with shared needles, lots of crack cocaine use paid for with sex, and/or sex with those who do! Sorry if that seems extremely politically incorrect, but those are the facts. AIDS has never swept through “middle class” America and it is not going to! The chances of being killed in a roll over accident in your SUV or even killed by a bio-terrorist germ are greater. There are of course those few hetero’s with no history of IV drug use or sex with those who do who just have bad luck I guess and somehow get infected, but they are so rare as to be of little consequence when one is struggling to come to grips with this epidemic in the USA.

Not to dismiss the risk of heterosexual AIDS completely in this country I would highly recommend reading Paul Farmers excellent book Infections and Inequalities ( 1999 University of California Press) for a very salient analysis. A few words from the book: “HIV tracks along steep gradients of power. In many settings, HIV risks are enhanced not so much by poverty in and of itself but by inequality. Increasingly, what people with AIDS share are not personal or psychological attributes. They do not share culture or language or a certain racial identity. They do not share sexual preference or an absolute income bracket. What they share, rather, is social position – the bottom rung of the ladder in inegalitarian societies.” (p.91)

I do believe that Farmer’s very thoughtful analysis of the HIV pandemic is right on the money and I will try to connect as much as I can with my own thoughts and proposals on the epidemic among gay men in the Denver, Colorado area. I am not sure though that “gay AIDS” in America in 2001 is not a much different animal than seen elsewhere in the world.

So it seems to me that in this country this brings us back to QUEERS! My favorite people for sure. Once again we are at the forefront of new HIV infections and the only difference from the early 80’s is that it is disproportionately our brown and black brothers, though be sure there are plenty of white faggots getting infected too. We really have historically always screwed in an equal opportunity fashion though as a group we still have very significant class and race issues to deal with.

In my darker moments I think that perhaps what has happened is that we in the gay community have come to accept a level of carnage from this disease that we are willing to tolerate. Kind of like the amount of gun violence or death from tobacco or meat we accept as part of life in America circa 2001. In which case this entire piece is just a waste of time and we should all just go home with a few of us eventually dying from AIDS.