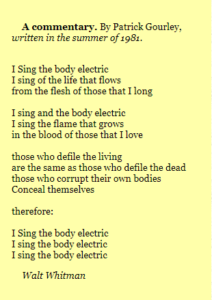 Kaposi’s sarcoma. Wow! A cancer all our own. Cancer is certainly as American as mom and apple pie. It’s something we give lots of energy to in this country-hmm-perhaps vast why we have so much of it?

How much energy should we as gay man be giving to this latest malady that is beginning to afflict us? Based on the raw numbers of known cases it is really quite rare and if you take a look at all the other help problems faced by gay men it’s pretty insignificant. The major health concerns of gay man remain alcohol and tobacco abuse, the various VD’s, viral hepatitis, intestinal parasites and queer bashers.

Despite its rarity, however, cancer is assigned to a very heavy duty and rented category in our world and gay men are currently not immune to these fears. It is so by many respected authorities on the subject that the vast majority of cancers are lifestyle/environmentally caused. Tobacco and alcohol being too culprits that quickly come to mind. Certainly a lot of us queers get in our fair share of abuse when it comes to alcohol and tobacco and therefore get the same cancers as straight people. See, we really can be just like them!–If we abuse ourselves enough!

So what does it mean that there now seems to be a cancer that could very well be unique to gain their – most often young (20’s & 30’s) gay men? I suppose there could be a strong genetic predisposition but then why hasn’t it shown up before – queers are nothing new! Is it perhaps a manifestation, a message if you will from our collective spirit, that all is not well in the gay male world as we swirl into the 1980’s?

“The men said this state arose from an overuse of the cock which the faggots new was a lie.” –––Larry Mitchell

The strait moralists of course have an easy explanation as to why we get certain of these diseases in the race way out of proportion with the general populace.” You fuck too much, you perverts.” Bullshit–––sort of!

The problem, brothers, isn’t that some (or perhaps a lot) of us fuck too much with too many different people but that we are interacting not just sexually but emotionally and intellectually while Iocked inside of a myth. Mitch Walker (see Visionary Love by Mitch Walker and Friends, 1980, Tree Roots Press, San Francisco) has written quite lucidly on this matter:” The myth of the homosexual says that there exists a person defined by a sexual attraction towards people of the same biological gender. This myth serves as an essential function in preservation of a culture: it denies the reality, the legitimacy of the culture – destroying mission of the so-called homosexual, and it does this by restricting that person’s essence and meaningfulness two distinct sexual acts performed with other persons of the same sex”. (Emphasis mine)

So you may wonder how I have made this apparently nonsensical quantum leap from to the Myth of the Homosexual. Well, let me explain.

If you are able to control a person’s definition of their selfhood you exercise a lot power over them and their behavior – you are able to control them. Speaking here to my brothers – the strait world said to us that the essence of being gay was sucking cock. This was very cleverly and effectively reinforced by giving us a very limited space to interact with one another – restrooms, grimy bathhouses, public monuments/parks, dingy bars – where the threat of harassment even to the point of death was a constant reality. This environment served to institutionalize quick impersonal sex that did not allow for getting to know the other person on any but a fleeting sexual level. Well dear ones – some things have changed in the past decade. Here in Denver at least our bars and baths are no longer seedy, dirty, out–of–the–way places, but palaces of pleasure where we are usually free from harassment to pursue sexo–spiritual ecstasy or whenever we happen to be about at the time! What hasn’t really changed is that we still are relating all too frequently to one another as sexual objects. At this point much of the gay world facilitates quick impersonal sex only because we are still buying into this myth about ourselves and allowing it to happen.

If Kaposi’s sarcoma like many other cancers is at least partially lifestyle caused perhaps it behooves us to pause and look at our own lifestyle. Are we having lots of impersonal sex with partners will either never see again or have no way of contacting if we do get sick. While staying up all night and having sex with half a dozen men can be lots of fun and very enhancing of our sexual/spiritual selves; if it’s something we are doing with a bottle of poppers screwed into our nose, a Quaalude up our ass , several drinks under our belts and hit of acid on board several times a month at the expense of getting adequate rest and nutrition perhaps we are asking for.

Listen to what your body is telling you about your drug use. Take the time to get to know your sexual partners – at least well enough to get in touch with them again if necessary. Realize that we no longer need to buy straight defined myths about ourselves. We have lots to teach the hetero world about love – its various physical, emotional and spiritual aspects but we won’t get much teaching done from a hospital bed and even less from the morgue!