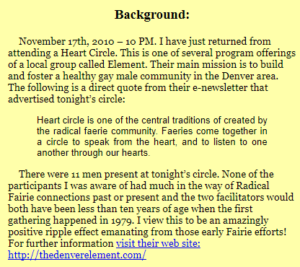 My personal connections with the approach to LGBT people, and specifically gay men, being a distinct cultural minority, a separate people whose time had come, was through Harry Hay and John Burnside. From the mid-1970’s on I was immersed in local (Denver, Colorado) gay politics through our Gay Community Center and was enjoying the sexual delights of those days with great relish. This sexual enthusiasm though was at times tempered by thoughts of “is this all there is to being gay”. It was with great interest then that I stumbled on the movie The Word is Out.

I saw the movie sometime in 1978 and the next day went into the community center raving about it. I had been particularly impressed with the segment featuring the two “older” gay men, Harry Hay and John Burnside. A woman named Katherine who said she knew them and had done activist work in New Mexico with them overheard my ramblings. She offered to put me in contact with them. A subsequent visit up to Denver was arranged and the rest is history, only slightly and on occasion revised! Harry and John were already at that time involved with several other gay men notably Don Kilhefner and Mitch Walker and the seeds for the first Spiritual Conference for Radical Fairies had already sprouted.

Myself and at least a dozen other gay men from Denver attended the first gathering in Arizona. It was an amazing event but I can honestly say that it was not life changing for me. Impacting yes, life changing, not so much.

At any rate the success of that first gathering quickly led to discussions of “lets do it again”! Dialogue in the form of endless correspondence (actually written by hand and sent by mail in those days!) and endless meetings in Denver with our collective occurred to facilitate the planning for the second event. It was to be called A Spiritual Gathering for Radical Fairies. The Denver collective, myself included, were really Fairie neophytes and took significant direction from Kilhefner, Hay, Burnside and Walker.

This gathering then occurred in August of 1980 at a National Forest campground in the foothills west of Denver. Over 300 Fairies were in attendance and it also was considered a great success. A movement to take over the queer world seemed immanent. I don’t think that happened though, if it did I missed it.

My involvement with things Fairie continued in one form or another through the 1980’s though I never did attend another large gathering. Ongoing local Fairie events happened though through out the decade.

There were two significant distractions that steered me away from further national Fairie activism. The first was the rather intense personal conflicts among key players in the movement. I allowed myself at times to be pushed and pulled by various factions. Finally rather than assign any individual blame through some sort of “Fairie litmus test” I choose to slowly withdraw.

The real clincher though in my decreased involvement was the fact that I tested HIV positive in 1985 and was already very involved locally in HIV education efforts. I must say though my considerable efforts in the AIDS arena were then and continue to this day to be strongly informed by Radical Fairie philosophy. We are really so much more than what we do I bed!

I am recently retired from a 38 year nursing career, with the last 21 years as a nurse clinician in Denver’s public AIDS clinic. Daily contact through my work with many thousands of gay men of all ages, class backgrounds and races continually reinforced for me the disheartening unactualized potential we have. At the same time though there were endless glimmers and often frank displays of our true gay male natures and those provided the juice for me to keep at it for 21 years!

Finally I would like to say that I actually have great hope for the future of continued Radical Fairie influence on the greater LGBT world so currently consumed with marriage and military service. A couple specific validations for this optimism come to mind. One relates to the amazing loving, persistently dedicated and compassionate San Francisco Fairie collective who cared for both Harry Hay and John Burnside in the last years of their lives. They were truly the essence of loving companions. The second validation is the Heart Circle I attended last evening. That sort of honest and open communication between gay men in America in 2010 is quite frankly astounding; ongoing ripples from stones tossed way back when!