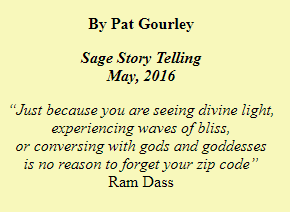 For me strange vibrations have usually involved bouts of anxiety, which fortunately have been short-lived and really quite rare in my 67 years. My first experience with being anxious in an uncomfortable fashion was in my early teens and can be directly related to buying into the bullshit being foisted on me by the Catholic Church and its minions.

In hindsight I do think that my budding awareness that I was a gay little kid was just beginning to come into conflict in so many ways with the Church’s teachings. The cognitive dissonance created by what I felt in my core butting up against the relentless brainwashing could be quite anxiety provoking. It was the most insidious form of child-abuse legitimately sanctioned by society and the Church and it created lots of strange vibrations. By my Junior Year in high school these religiously induced anxiety attacks were quickly abating in large part thanks to my first gay relationship with a loving queer spirit guide in the form of an elder loving mentor.

I wonder sometimes if what I view as the relentless child abuse from all organized religions, often in an extreme form of psychological coercion and intimidation, doesn’t in some ways provide the cover or rather the rationale then for actual physical abuse both sexual and non-sexual to take place.  If you are willing to foist on young impressionable minds all sorts of bullshit succinctly laid out in the Baltimore Catechism for example does that make it easier to then extend this form of mind control to involve the physical? All of us are born atheists and really should be left alone with that universal view to eventually sort things out on our own.

I must say that my current spiritual view, which can best be described as Buddhist-atheism, is no longer a source of any sort of anxiety. I have finally learned the amazing calming effect of sitting quietly and focusing on my breath especially when the current fucked-up state of humanity begins to impinge, usually due to too much Internet surfing. Amazing how this can also be remediated by a walk to the Denver Botanic Gardens and a few hours of soaking up that energy.

After extricating myself from the Catholic Church in 1967 my next real bout with anxiety did not occur until the fall of 1979 and involved a bit too much psilocybin and a trip to the Empire Bathes. The resulting moderate freak-out was anxiety provoking enough for me to essentially swear off all drugs for the past 35+ years with one accidental episode this past winter — details to follow.

My next strange vibrations did not occur until the fall of 1995 following my partner David’s death from AIDS related stuff. For many months after his death I would have nightmares often ending with waking up in panic mode with the sheets often drenched with sweat.  This did stop eventually after about six months of talk-therapy with a great shrink. No, I do not think I was experiencing untreated sleep apnea.

My most recent bout of strange vibrations occurred this past January when I was out in San Francisco. I was being Innkeeper and mentoring a new 14-week-old puppy.  It was a rainy evening with only a few guests and as is my want I started craving something sweet about 7 PM.  The pup and I were ensconced in the library catching up on Downtown Abbey episodes.

Wandering into the kitchen I spied a Christmas tin on the counter. Upon inspection I found cookies that I remember being very similar to ones made in large quantities around the holidays. I quickly made short work of 6 or 7 of these cookies. I thought they had a bit of an odd molasses taste but still hit the spot. About 30 minutes later I began to experience very strange vibrations. This was odd I thought since I was in one of the safest places I can imagine on earth and to have waves of anxiety sweep over me rather relentlessly soon had me wondering if these weren’t perhaps the infamous house pot cookies. Several folks in the house have medical marijuana cards and made use of the herb on occasion often in the form of baked goods but usually only ¼ to ½ of one cookie imbibed at a time.

Long story short I was able to determine that the cookies were “loaded”.  After several calls to Denver friends with questions about HIV Meds and large quantities of THC I was assured there were no physical interactions. I clearly recognized the anxiety as familiar ground and was able to weather the storm with the help of a good friend who came home from work early and some conscious breath work. After about six hours I was pretty much back on earth with the strange vibrations fading away. I was left to ponder a line from an old Grateful Dead song: “Maybe you had too much too fast”.

I was able throughout though to remember not only how to operate my cell phone and walk the dog but also I could easily recall my zip code.