It was such a beautiful weekend I thought I might just cop to some James Broughton poetry and read a few lines for you all and call it a day. James wrote a lot about what could be called the ABC’s of life. Though I actually don’t read much poetry I do appreciate that poets may actually be some of our most astute observers. The great works of Walt Whitman of course come to mind.

The ABC’s of life I guess might imply for me the real essence of it all. I must say though at 63 I am almost as clueless as to what that “real essence” might be as I was at 18. Perhaps more to the point the ABC’s of life may actually refer more to its essentials rather its essence.

I might actually venture to say that it would be those indisputable essentials that are the real ABC’s of life. The standard flippant line about this is that the only two things we can count on in this life are taxes and death. Only half of that duo though is an “indisputable essential” for everyone and that would be death.  Now that we know that corporations are people they frequently pay no taxes at all. Though many corporations may last longer than many real people they are certainly not immortal either.

The great indisputable essential for us all is our own impermanence. Life of course is full of reminders that this is a short trip and for many unfortunate souls a sad and bumpy ride at that. This was brought home to me one more time again this past week when a dear friend who had been suffering from very debilitating and painful Multiple Sclerosis succumbed at about 1PM on Friday. Betsy was sixty years old and much of her adult life had been spent in a wheelchair. She did though marry very well and her devoted and truly saintly husband, who also happened to be a nurse, was able to keep her from ever entering a nursing home which would have most certainly resulted in much shorter and much less fulfilling life. His unflinching devotion 24/7 year in and year out, for decades, was truly a remarkable example of devotional loving unconditional positive regard. Something I have only pathetically strived for in my own varied lives’ roles as nurse, lover, brother and friend. 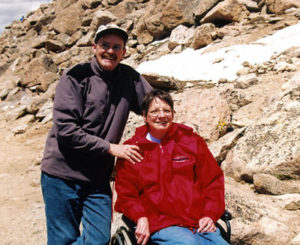 Betsy’s husband Richard was one of my main Buddhist teachers and in the early 1990’s I believe Betsy also took initial vows and actively participated in this Buddhist spiritual trip with her husband and many of his friends. She was someone though constantly reminded of her own temporal impermanence on a daily basis. Chronic muscle spasms, wheelchairs and Foley catheters to name just a few of the indignities that can come with multiple sclerosis have a way of doing that in a manner many of us are able to avoid much of our lives.

I guess it was about ten years or so ago that Betsy became involved with a very fundamentalist Christian group. This was not necessarily something her Buddhist husband was particularly excited about but he was his usual unflinching, loving supportive self. Watching Richard care so unconditionally for his chronically ill wife in their home with really only minimal outside medical help year in and year out has been one of the most important teaching lessons in my life.  Richard’s support of course went so far as helping her get to weekly prayer meetings with this decidedly orthodox group of evangelicals.

In the last couple years of her life though Betsy started attending a local Catholic Church near their home. This was actually a Church with a very quiet and peaceful meditative chapel that Richard often used himself. The practice of contemplative prayer is something that at least some Catholics are very good at and a practice Richard felt comfortable with and probably very adept at. I have always admired his personal discipline.

One thing led to another apparently and Betsy started taking lessons to become a Catholic and being his loving and always supportive self Richard also began the steps to conversion. Unfortunately the process was speeded up this past week when Betsy became ill with an upper respiratory syndrome and began to decompensate quickly, her health already very severely compromised.  Both she and Richard were baptized and received their first communions together last week. I must wonder though how long it will be before Richard becomes a lapsed Catholic but perhaps he never will and that’s OK really.

I am not, I don’t think, going to allow this man’s conversion to the religion of my childhood, despite his having been a great personal and spiritual guide of mine for the past couple of decades, influence my current spiritual path or lack there of. I can fully appreciate the solace Betsy gained from her conversion to Catholicism and who am I to say the same path might not be mine someday down the road. The Church really does love to welcome back the fallen, its one of their specialties. Faith, all you need is faith that most magic of all elixirs.

For me though coming to grips with this indisputable essential called impermanence has actually resulted in a flipping of the ABC’s of life. That is, on my path, I define them in reverse, the “C” would be for Catholicism, the “B” for Buddhism and “A” for atheism.

I have just finished plowing through   A Universe From Nothing by Lawrence Krauss, noted astrophysicist, which attempts to answer the old conundrum of how can their be something – us, all our stuff and the whole fucking universe – from nothing, always the fall back argument when arguing the necessity for a supreme being. Well according to modern theories of physics, as actually quite understandably laid out by Krauss, something from nothing is quite possible. No divine intervention is required if you buy this theory and it is quite compelling. I would not begin to explain this theory; I cannot at this point do it justice. I would refer you though to his works and several very good You Tube presentations including a delicious dialogue from this February with Richard Dawkins at Arizona State University in Tempe.

In my more infrequent dark nights of the soul I still can long for the solace provided by the rich religious tradition of my childhood. For better or worse though blind faith is just not a big part of my own ABC’s of life anymore.

Despite the very real reminder of my own impermanence I have received with the death last week of a dear friend I still can’t bring myself to flee back into the falsely soothing arms of mother church. Someday maybe, I suppose anything is possible. My difficulty with accepting a creator and a grand plan for us all can be summed up nicely with this quote from the late Christopher Hitchens:

“Once you assume a creator and a plan, it makes humans objects in a cruel experiment whereby we are created to be sick and commanded to be well”

For now at least I am content to further explore the reality of my existence within the context of just the “A for atheist” component of the ABC’s of my life.