In perusing various definitions for “magic” I happened on one from Wikipedia that struck a cord and that I am using as an excuse to connect this week’s writing to Chelsea Manning. This definition implied that for many, in the West in particular, the primary purpose of magic is personal spiritual growth.

I have always felt, whether or not one believes in any sort of deity, that the coming out process for all LGBT people to a greater or lesser extent is a spiritual journey. These spiritual journeys most often I think involve growth and along with that growth often comes great change and often major life-impacting insights. Our worlds, and how we have been told since the cradle how our lives should look, are often turned upside down by this journey and then the amazing thing is we realize the world looks OK often from an upside down perspective. 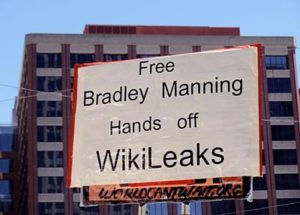 Though coming out remains in some respects quite the daunting spiritual journey, perhaps in some ways more so than thirty or forty years ago, for all LGBT peoples I think it is particularly so for our Transsexual brothers and sisters. In this age of high queer assimilationist politics, and not only in the areas of marriage and the military, I feel that it is our Trans-comrades who are truly in the vanguard of queer change these days.

Having said that I want to share, as much for the record, the statement that Chelsea Manning made to the judge before her sentencing last week. This statement was recently made public by her defense counsel. Her sentence was for 35 years and this follows three years of imprisonment that included torture, in the form of solitary confinement and forced nudity, and that is what happened once she reached the U.S. I shudder to think of those first few months in a military brig in Kuwait! For a little perspective on Manning’s sentence remember that a military trial and conviction of William Calley for the massacre of anywhere from 347-504 unarmed civilians in 1968 at My Lai, Viet Nam resulted in the end with his serving only three and half years of house arrest and then a full pardon from Richard Nixon in 1974. There are many other examples of minimal to little punishment for what can really only be described as war crimes on the part of the U.S. government.

Chelsea Manning’s Statement to the court follows. Why this statement is not much more vitriolic or perhaps based on what she has experienced at the vindictive hands of the United States government a total capitulation is remarkable and I think a great testament to this woman’s admirable resilience.