I have for years dreaded being described as ‘normal’. As queers we are really anything but normal whether we like it or not and I truly believe that this is our greatest gift. There is that old Chinese curse “may you be born in interesting times”. A similar curse for me would be “may you be born normal”.

I must admit though that earlier on in my HIV diagnosis I craved “normal” lab values but eventually came to appreciate the fact that one can live quite a relatively healthy and productive life and still not be in the ‘normal range’. Normal really is something that is not all its cracked up to be. I suppose too there was a time in the sixties when I was experiencing my great gay awakening that I wished I could be normal. Fortunately, thanks to a much older lover, the Grateful Dead and an amazing commie Holy Cross nun I soon got over that!

Normal is defined as conforming to a standard, being typical or expected. How boring is that! I suspect the normal ones in the human herd rarely initiate evolutionary change in virtually any sphere of their lives. I am in favor of abolishing the term all together particularly when used in medical or psychiatric settings. A sub-definition of the word if you will is “free from physical or mental disorders”. Who the hell can honestly claim that reality?

I was once again reminded of how being outside the norm can be a very powerful agent for creating change while delivering progressive political and social messages particularly in the hands of a gay man. This light bulb of “fuck normal” once again went off in my head when I saw the Keith Haring exhibit at the de Young museum in San Francisco this past January. For anyone not familiar with Haring or his artwork he was a very prolific gay artist who lived in New York City from 1978 until his death from AIDS in February 1990. 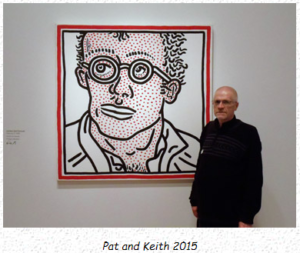 I suppose my first impression of his art that I recall was in the late 1980’s and I thought how simple, I could probably do that. Ha, well I guess that bit of self-delusion wasn’t really normal now was it! I have overtime though come to greatly appreciate the simple complexity and actually many revolutionary aspects of his immense body of work. Not only was Keith very openly gay he also was quite upfront about his AIDS and these two realities permeate much of his later work as do many themes of social justice and the corporate greed and rape of the planet.

Haring never drew from sketches but rather had the ability to just start doing it and it happened in amazing fashion. The de Young exhibit also had a short documentary with it that was quite enlightening into his beautiful soul, his politics, his sexuality, his AIDS and most amazing his creative process. Wow, nothing normal about him. And talk about simple line drawings that celebrate the penis, often his own, the exhibit was resplendent with many phalli.

And of course on my second trip the next day through the exhibit I was reminded that this was San Francisco and that we weren’t in Kansas. There were dozens of middle school boys and girls on a field trip viewing the many graphic sexual images and not appearing to be phased in the least. In fact many were taking notes for class and actually discussing, and not in hush whispers or giggles, the many amazing ways fucking and sucking whereon display and at the same time delivering a strong social and often political message.

For whatever reason most of Haring’s work is not titled. He as often as not addresses issues of racism, AIDS, climate change and the many societal facets of capitalist corruption and greed so rampant in our culture today in his work with simple lines. His drawings also often speak to very basic human realities of love, kindness, generosity and the constant message that we are one world and most certainly all in this together.

A short quote form the artist:

“Drawing is still basically the same as it has been since prehistoric times. It brings together man and the world. It lives through magic.”

Thank the universe that there was nothing normal about the magic Keith Haring brought to the world.