I have written many times over the years in this group about men and women who have influenced me. The men of course include Harry Hay and Jerry Garcia to say nothing of really countless gay brothers. In hindsight and this is actually current to this day it is the women in my life who have imparted the modicum of wisdom I have today.

It all started with my mother of course and her relentless unconditional positive regard. I was the oldest male in a modest-sized Irish Catholic family (6 kids only!) and therefore could really do no wrong. The closest I ever came to being reprimanded by her was the frequent Zen injunction to please go sit down and be quiet. Oh, and there is the one time I split my brother Brian’s head open with a rock. We had been throwing dirt clods at each other, something farm boys did frequently, and I apparently hurled one my brother’s way that also had a rock in it. That resulted in the only corporal punishment I ever received from either parent and involved a couple whacks on the butt with her shoe. I also fondly remember two of my several aunts, Dorothy and Alice. These women taught me the fine art of cooking and the joy of gardening and eating fresh vegetables. Lessons that continue to serve me well decades later.

I have wondered on occasion whether or not my mom may have had lesbian tendencies. She did join the WAC’s as a nurse in World War II stationed in Hawaii, was an ace softball pitcher; never fond of cooking or housework and always eager to drive large farm machinery. Perhaps it was lucky for me that I was born pre-gay-lib in 1949. The night I was conceived LGBT identities were really not even a twinkle in any one’s eye outside of a few urban coastal enclaves. Options for most Catholic women who might have been gay in the 1940’s were largely limited to the convent or marriage preferably with as many babies as you could pop out. Of the many, many compliments I can pay my mother that she might have had dyke tendencies is right there at the top – loved you mom! 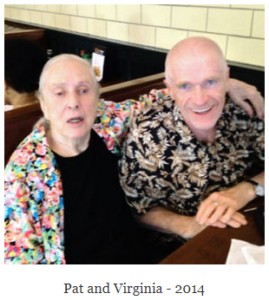 The next woman to come along who had a very profound effect on my development was Sister Alberta Marie my government/civics teacher in the last two years of high school. I owe this woman a great debt of gratitude on so many fronts but most particularly I learned to never be afraid to question authority. I was able to reconnect with her in June of 2013 in New York City where she has lived for decades and worked as an immigration lawyer. To her immense credit she was tossed out of the convent shortly after I graduated high school with a long list of offenses per the local bishop. The final straw I think was bringing renowned Jesuit anti-Vietnam War activist, Daniel Berrigan, to speak to the school’s Peace Club at Marion Central, which she was instrumental in founding.

Next came a group of women who lived communally with us in Champaign-Urbana from 1967-1972. Several of these powerful women helped to shape my budding radical politics and began to impart a feminist analysis to my worldview. One in particular was a frequent LSD tripping companion. We would drive out to a local forest preserve and then take, in those days usually, a hit of something called windowpane and spend the day having religious and spiritual experiences with the local flora and fauna. To this day I think those trips were as close as I have come, despite many, many hours on the cushion and in retreat, to realizing the non-dual nature of it all. It really is all just one taste and one’s personal taste of it often fleeting.

Next up were a group of nurses again all women who I worked with at the inpatient psychiatric unit at then Denver General Hospital. A few months after arriving in Denver in late 1972 I was working on the Psychiatric Unit with a cadre of very strong nurses who I admired greatly and encouraged me to pursue my own career in nursing and that dance continues to this day. They were a feisty bunch who were never afraid to put uppity physicians in their place and were totally instrumental in shaping my life-long philosophy of nursing.

By the mid-1970’s I was becoming involved in the Gay Community Center on Lafayette Street and being introduced to several potent women best described as radical lesbian feminists at the time. These women helped me through occasional and well-deserved criticism to hone my own political persona into one more effective and definitely more honest. A shout of thanks to Carol, Tea, Britt, Karen, Janet, Katherine, Donna and many others who helped immensely broaden my perception of what it was to be “queer-other” and helping to create a fertile ground that definitely aided in my latching onto Harry Hay and the Radical Fairies. Many of these same women were also instrumental in getting what turned out to be very successful AIDS efforts off the ground here locally.

By the late 1980’s I was exploring spirituality a bit differently, leaving the pagan/wiccan traditions behind and moving to the cushion and re-invoking my mother’s frequent injunction to sit still and be quiet. In the early 1990’s I became involved with a local chapter of the Kwan Um School of Zen. The guiding teacher, based in Rhode Island but a frequent visitor to our Sangha, was a women named Bobbi who had a day job as a hospice nurse and oh by the way she is a lesbian. Another potent mix of female energy I owe a great debt to.

In writing this piece more and more women have come to mind who were and are great friends and persons who had significant impacts on me. I’ll stop though in the spirit of brevity. It is quite frightening really for me to try and even think where I would be today professionally, culturally, psychologically, socially and spiritually without so many dynamic women influencing me along the path.

Sadly as I finish this piece I just received an email about the death of straight woman ally who I had gotten to know well in the 1980’s through her tireless volunteer efforts with the Colorado AIDS Project being on the original CAP Board of Directors. Straight allies in those dark days were very brave and cherished souls. Jill got to spend Thanksgiving with family around her bed before succumbing to a four-year battle with cancer.