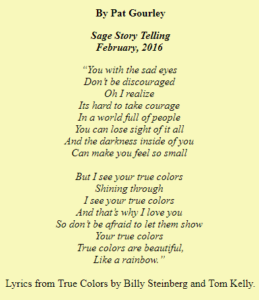 Once you read the lyrics to the song True Colors made a famous hit by Cyndi Lauper back in 1986 you can see why it has been adapted as a Queer anthem and especially by certain LGBT youth groups. A great coming out song if there ever was one.

Steinberg originally wrote the song about his mother. Later modified by Tom Kelly and picked up, when offered, by Cyndi Lauper. At the time she apparently felt drawn to it because of the recent death of a friend from AIDS.

All the gains made by Queer people in the past 50+ years or so can be laid squarely at the feet of our being willing to let our true colors shine through. As has been mentioned many times in this group and then powerfully validated by our personal stories it is the individual coming out process that is such a very powerful change-creating phenomenon.

It is this act of true self-expression that sets us apart from all other minorities and gives us such power. Also the fact that we are part of and transcend all economic, class and racial groups gives us a leg up. We are everywhere.

The AIDS connection to the song brought to it by Lauper has made me wonder about the reason and implications for recent data on new HIV infections just released last week. In a story from the Boston Globe published on February 23rd, 2016 they broke down recent CDC data on projected lifetime risk of HIV among gay men by race.

The data was sobering to say the least. Overall risk for HIV infection among Americans as a whole has decreased. The risk of infection was 1 in 78. It has now decreased to 1 in 99 for the U.S. population. However per the CDC report the lifetime risk for queer men is 1 in 6, overwhelmingly greater than for the population as a whole. That is amazing enough but where it gets truly shocking is in the racial disparity for gay men. The lifetime risk for black gay men is 1 in 2, for Latinos it is 1 in 4 and for white gay men 1 in 11.   [ Reference: Boston Globe – “Half of black gay men will be infected with HIV, CDC finds”   ]

WTF! I guess not surprising the greatest risk for black gay men is in southern states but the highest risk is in the District of Columbia. As depressing as this news is it actually reflects an improvement over the past but still unacceptably bad.

In the actual CDC report certain prevention challenges for the gay African American community were identified. These were: socioeconomic factors, smaller and more exclusive sexual networks, sexual relations with older men, lack of awareness of HIV status and stigma, homophobia and discrimination. I would hope that these “prevention challenges” are ones that have been identified by community-based black gay men themselves and not pronouncements that have come down from on high by CDC AIDS specialists.   [ Reference:  CDC Report – “HIV Among African American Gay and Bisexual Men”   ].

So I’d ask what we as the broader queer community can do to help reverse these dismal statistics? A first step might be taking a hard look at how significant racism is still a reality within the queer community particularly and what am I doing personally to address any latent racism I may harbor.

Does the safe space exist in a non-threatening manner for the queer black community to develop and thrive and what is needed from the broader queer community to facilitate this happening? Perhaps this just involves our ongoing participation in the struggle for peace and social justice.

We must guard against a cop-out response to these stats by saying well it is the homophobia within the broader African American community that is responsible for this. Most of us have come out of families and communities less that welcoming of our queerness if not out right hostile. Something else has to be going on here. At the very least these extremely sobering AIDS statistics need to be a reason for pause and sincere soul searching certainly by gay white men looking sincerely at how we might be part of the problem too.

The best HIV prevention strategy is the creation of a society where everyone’s true colors can shine through from cradle to grave.