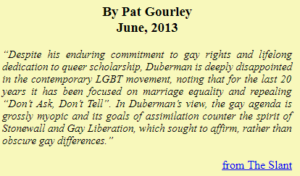 The quote [ on the left ] referenced from the online entity The Slant is from an interview done recently with Martin Duberman. Duberman for those perhaps unfamiliar with the name is a queer, radical activist with a very long and impressive academic background and the author of numerous books and countless articles. He is on faculty as a professor of history emeritus at the City University of New York. The interview was published online June 5th, 2013 and is commemorating the 44th anniversary of the Stonewall Riots. His most recent book is titled The Marin Duberman Reader

In reading the Duberman interview I found myself hearing similar ideas I was frequently exposed to in the late 1970’s as a result of my budding relationship with Harry Hay, life long gay activist and founder of the Mattachine Society in 1950 and very instrumental in birthing the Radical Fairie movement. It was through contacts at the Gay Community Center of Colorado in 1978 that I was able to connect with Harry and his partner John Burnside who were living in northern New Mexico at that time.

An activity I was involved in during the spring of 1979, through The Center for the week of activities commemorating the Stonewall Riots, was the 3rd annual Lesbian/ Gay Symposium held the Saturday before the Sunday March. We were still marching back then rather than having a pride parade or at least still hotly debating whether it should be a “March or a Parade”.

The symposiums were part of Pride Week activities starting in 1977 and continuing into the early 1980’s working with the support of the Center. They consisted of a single daylong program of workshops. Presentations and discussions were of topical interest to the LGBT community and often fairly broad in scope. Don’t Ask/Don’t Tell was of course not even on the distant horizon yet and marriage equality not even a figment of anyone’s imagination. For many early LGBT activists participation in the military was not considered a desirable pursuit for anyone gay or straight, and marriage was thought to be a rather unsuccessful heterosexual construct meant to primarily control women and property, definitely not something to strive to emulate.

Since I had gotten to know Hay and his loving companion John Burnside in the previous year the awareness of his rich queer activist history led me to pursue him as a keynote speaker at the 1979 Symposium. They were at that time both heavily involved in the planning for the first Radical Fairie gathering that was to take place in the Arizona desert outside Tucson later in the summer. In personal correspondence dated 6-11-79 in typical Hay fashion he agreed to come up for the event. Written letters in 1979 were a viable and frequently used manner of communication and Harry was a master at writing long letters. Regarding my request that he and John be keynote speakers he wrote: “…being ‘keynote people’ scares us. We love to rap with people but we don’t take kindly to the old hetero-imitating formalisms of speeches or addresses.”

Though I have many pages of personal correspondence with Harry in particular I unfortunately never saved my responses back to him. I apparently responded that that would be fine and they came to Denver for that Lesbian and Gay Pride weekend of 1979 and participated in several workshops at the Symposium. He spoke briefly at the rally at the end of the Pride march that Sunday in Civic Center. Harry with bullhorn graces the cover of the July 6, 1979 issue (Vol. IV, #7) of Out Front Magazine. I do not remember any of his remarks at the rally but the theme of the march that year was “We Are Family” so I suspect he spoke to that.

Much of Hay’s thought on queers at the time focused on the three questions originally raised by the Mattachine society; who are we, where do we come from and what are we for? If we were to be pursuing these questions in earnest at the time, and they are still quite relevant today, assimilation into the larger hetero society with marriage equality and open military service were unlikely to facilitate that exploration.

In the Duberman piece referenced earlier he describes the current “gay agenda” focus on marriage and the military as very myopic and Hay would certainly agree. In fact I heard Harry dismiss both as sadly hetero-imitative and nothing we should be serious about pursuing if we were intent on getting to the root of our difference and bringing our unique gifts and contributions to the larger human banquet.

When Duberman was asked specifically about the influence of queer culture on mainstream America he responded in part: “So far, I don’t think the effect of mainstream culture has been significant, and I think that’s the fault of both the gay movement and the mainstream, which is willing to accept and tolerate us to the extent that we act like good middle class white people”.

If I can be so bold I would say that both Hay and Duberman firmly believe that our real strength comes from being “outsiders”. Perhaps the potential for at least some of the change humanity desperately needs at this juncture can come from queer folk and that will only come about if we relish and explore our differences as possible keys to viable solutions to our immense problems today. Not to throw too much of a burden on us but we really do need to be in the vanguard of a radical restructuring of the entire social order or we are pretty much screwed both as a species and a viable planet.

How wonderful if every June we could renew out commitment to being “other” and recommit to using our unique worldviews to tackling some of the greatest issues we will face in the coming year.